Luckily I was out in London to see a musical, and planned to have dinner before the show started. What was fortunate was the distance from the theatre to On The Bab, it's a very short walk from Covent Garden underground station.
We arrived to the restaurant, which looks like it also caters for takeaway and for Deliveroo so you could get it at work if you're working in London. We were seated almost immediately, which was lucky as I believe if you arrive around 6:30pm or longer then prepare to wait in a queue. The interior was exceptionally cramped, not as cramped as Misato.
Staff appeared to be attentive when we walked in, but when we were ready to order I must've been waiting for a good 10mins before someone noticed we haven't ordered anything.
We ordered one dish each; Kimchi Bokeum Bab, Beef Bibimbap, and then the fried chicken (Yangyum chicken). There are 3 to 4 'sizes' of the chicken which is basically portion sizes which equated to X amount of chicken, and to share it was good just to go for Medium. Though just be aware it's not X amount of chicken wings or thighs or anything, they don't do it the way Colonel Sanders, it's X amount of chicken PIECES. Yes, you still get wings and other conventional cuts, but it's not always going to be all of that, you'll get nuggets and other stuff. Don't be sad though, because it tastes brilliant! You also get a choice of 4 different sauces that get drizzled on before serving. We chose the sweet spicy, but I'm told by my friend that we could've just had a mix of all 4.

I think I need to make this clear about the Bibimbap, as quite often people expect the burn-your-hand-off-if-you're-not-careful stone bowl for the dish, which will cook the food the longer you leave it. The stone bowl one is a dolsot bibimbap, which unfortunately is not what On The Bab serve you with. Therefore you're served with a normal Korean metal bowl with everything cooked already, but it's warm, not hot. And probably will go cold when you're midway through it. A shame, but I suppose you're not left with scorching burns at the top of your mouth right? Meh. 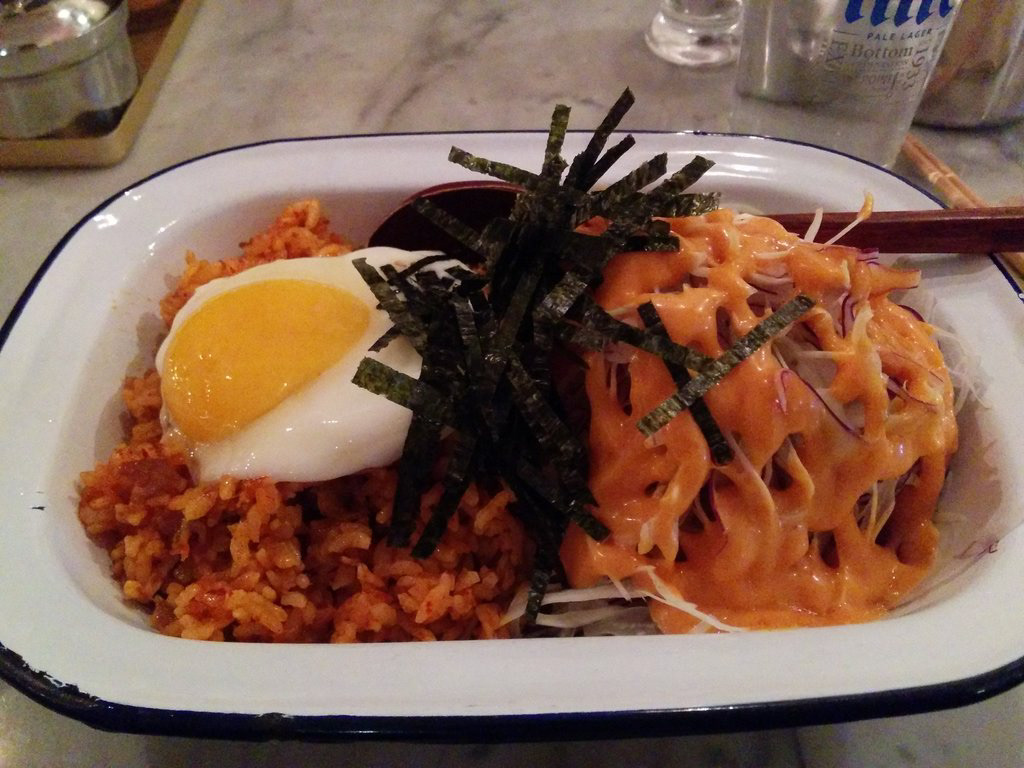 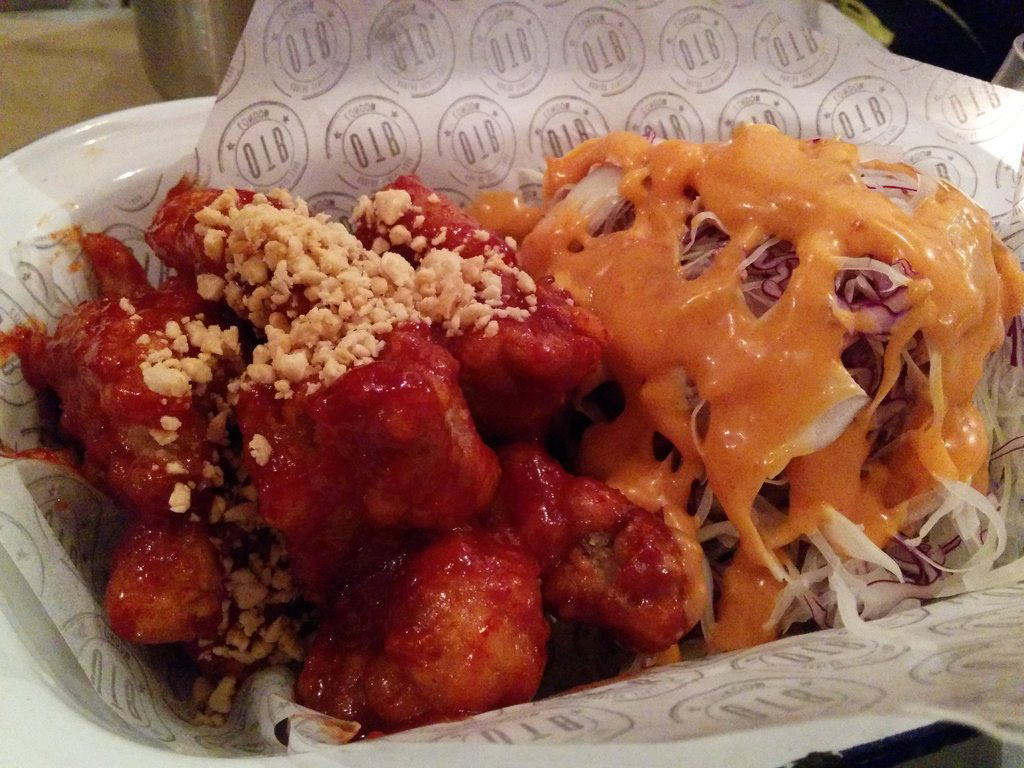 The Kimchi Bokuem Bab is effectively egg fried rice with bacon bits and supposedly kimchi. I couldn't find the kimchi, but I could taste the masses of gochujang used to flavour the rice and dye it red. Still, I like the taste of that and it's a worthwhile meal to try, the slaw that they serve with the dish is super thin so it's a nice accompaniment, but they do smother it with a sweet mayo on top, too much mayo. And those of you who like egg that oozes, this is for you. Then we have the dish we have come here to try - the yangyum chicken.
Yes, they crush some peanuts on top which I thought was weird, but it works. Then another helping of the slaw. Could I assume that was to fill the dish up? However, boy was it worth waiting for; the chicken looks wet, but it delivers that crunch thanks its twice or even triple fried method. It's still piping hot, the sweetness of the sauce gives it more flavour, then followed by a very mild burn and finished off with hint of the peanut makes this the single dish that's well worth making the trip for. When I next go back I'd definitely try the other flavours, or even give me a sample of each flavour in each corner.
In conclusion, get there early or join the hungry queue. The yangyum chicken takes time so if you want that served the same time as your other dishes, order that first then read the rest of the menu, but remember your table is not that big; you've tried having lunch on a lecture hall desk, assume it's like that. There are other food on the menu to try but if I were you I'd just go for the fried chicken.

📍: On The Bab, 36 Wellington Street, Covent Garden, London WC2E 7BD
💶: €-€€
🙂: 7/10
Do you have a place you'd like me to check out? Let me know by completing the form below:
Thanks for getting in touch and letting me know which foodspot to try! I'll let you know how it goes :) - Keyfobandgob
↑Back to Top